Review: He Loves Me Knot by RC Boldt 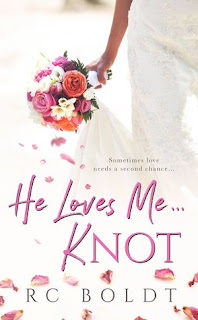 I never looked back after skipping out on my own wedding, even if it did leave me estranged from most of my family. Eight years later, I have the life I’ve always wanted. As an advertising account executive, my world is damn near perfect.

Until I come face-to-face with my past. With the man I once loved. The man who holds my future in his hands. The man who’s hell-bent on getting even with me for leaving him at the altar.

Even with all the unfinished business between us, I still love Knox Montgomery. The only problem?

5 'Falling captive to the powerful euphoria of our love.' Stars.

Well, Bless your heart, perhaps I should bless my own heart because this book put me through the ringer!! And I loved every emotional, laugh out loud, heart breaking... nail biting, soul crushing, petal plucking, and well, just every consuming moment that came my way. Gah! RC Boldt penned one hell of a book here!! I've got stars and love in my eyes after devouring this beauty.

Hands down, He Loves Me...Knot is one of the best second chance romances that I've ever lucked into reading. Having read a couple of the authors previous works and loved them I jumped head first into this one blind. Initially I had some conflicting feelings over characters and the direction I thought the story was going... phew, thank goodness that didn't happen because I'm not sure how a menage would work out in a second chance romance. Bahaha.. my simple solution for everything in fiction that includes two guys- automatic menage scenario! Woot! That's one way to add spice to any situation lol but alas, Becket is Emma Jane's BWOB(best friend without benefits).

"Once upon a time, we were in love. Then I found out he didn't really love me and I left."

Emma Jane Haywood left her fiance, Knox Montgomery, standing at the altar eight years ago. Plagued by a broken heart and the boy she never got over this is the tale of her life starting a new. A lot can change in eight years, and at times absolutely nothing changes when you're heart is still pining for the boy you left back in Mobile. This is a story of fate and trust, one of mending all the hurts and opening your heart back up to the one you walked away from... because eight years later the one you walked away from unexpectedly walks in and is your new boss. Let the games begin!!!

"When the past knocks on your door, it's because there's unfinished business." 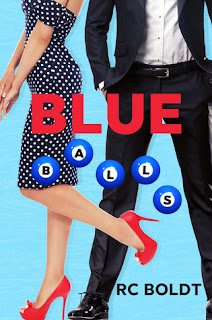 Truth: A painful condition caused by a prolonged state of sexual arousal without release.
Myth: Only affects males.

I’m beyond frustrated with the man who’s left me high and very far from dry. Multiple times. But, somehow, even though I’m not interested in a relationship, Mr. Tall-Dark-and-Handsome keeps me coming back for more—one crazy, sexual debacle after the next.

Come hell or high water, the stars will align, and the release will be out of this world.

JACK
I’m captivated with the woman who’s left me sixty-nine shades of blue, and she's only in this for one thing. The first time, I blew it—and not in the good way—but I’m going to ensure we finally see it through. I need to put an end to this “plague” of sexual calamities and prove to Sarah that we can have more.

It's time to grab the universe by the balls and show it who's boss.

With quirky, fun covers and one of a kind titles that are out grab your attention, RC Boldt quickly became detected by my book-nerd radar! A little Clam Jam here, a few Blue Balls there, yeah, you know you're in for a good time and more than a few laughs along the way! I adore RC Boldts' refreshing take on rom-com, you have to experience it first hand,  it truly is a unique literary roller coaster ride of uncontrollable laughter from start to finish. Strap in baby, those balls are about to become a few shades of blue!

From vagina monologues to witty banter and unbelievably intelligent chocolate wrappers, this book serves up some of the best internal banter that I've ever come across, crass, hilarious and just downright honest and realistic... normal people stuff but in a book and funny. Just because it is.

'At the sight of the blue flowers inside, the confusion lining her features is clear. Because these particular flowers aren't anything to write home about in the least. In fact, they're pretty plain.
Leaning in, I say softly, "They're globularia corifolia. Or more relatably called..." I pause, waiting for her eyes to lock onto mine to finish.'
"Blue Balls."

Now, I'm not going to lie. This book almost gave me a case of blue balls because of Sarah and Jack's Blue Balls. I mean, SERIOUSLY!! Just when I thought they'd finally be able to seal the mo-fo'in' deal... uhhh, nah, bro. Not today!  Like a serious case of -you lose- 'please play again'. BUT! At least with aaaaaaaaaaaaaaall THAT! They get to play over and over and OVER, time and time again! Oh YESSSS! Jack and Sarah definitely "got it goin' on" and play they will. *wink*

Denial ain't just a river in Egypt. A little baggage to work though gives the story that bit of meaty angst we all love and crave. With roles reversed, it's fun to watch this play out throughout the story while we all chase the Happily Ever After together.

Blue Balls is hands down one of the best romantic comedies that I've ever read! It has everything that I love, realistic characters who ooze -the- sizzle & swoon factor, laugh til you almost puke wit and banter, a magnetic pull and angst ridden push, loads of sexy times and just an over all entertaining read that you don't want to end. 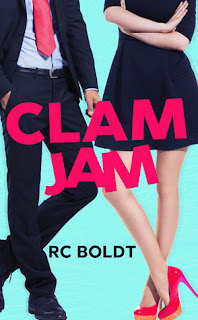 Clam Jam
Definition: the female equivalent of a cock block.
Example: You're chatting with a guy you're interested in and your friend comes along and lays claim to him.
Maggie
That's my life except it's worse. My friend who keeps jamming me is my gay roommate, and if that isn't a W.T.F. moment, I'm not sure what is.
Fact: He went home with three yes, three of the guys I had been so sure were into me.
Fact: He's really pissing me off. I mean, hello? I'm trying to get back in the saddle, but I'll never manage to get a boyfriend before the age of fifty if he keeps this up.
Fact: Secretly, I wonder what it would be like if he weren't gay. Why do all the hot, sweet, tender-hearted guys have to be gay?
Fact: My gay-dar needs a serious tune-up.
Ry
The day I interviewed for the room to rent, everything changed. I knew I had met the girl, except there was one small problem: she didn't want anything to do with men. I recognized a top-notch force field when I saw one. She'd been burned badly and didn't want to deal with a heterosexual guy as a roommate. I could've turned around and found another place to live, but I wanted to live there with her.
So I had to go undercover.
Fact: I'm in love with my roommate.
Fact: I'm a likely candidate for carpal tunnel surgery since all the action I've had for the past year has been my hand.
Fact: She's going to hate me if I come clean now.
Fact: I'm not giving up. Which means I'll just have to continue to run defense until I figure out a way to get Maggie to see the real me.
The me that loves her.
The me that would never do her wrong.
Until then, I'll keep running off every guy who shows any interest.
Until then, I'll continue to Clam Jam.

I'm a shallow reader, typically basing my next read on the cover. Yep, 100% cover wh*re, here.  No shame in my reading game whatsoever. Now, this book is where my little reading world gets turned upside down and I'm reading a book solely based on the title. I know right, sometimes I don't even understand myself LOL. Apparently the key to grabbing a visual person's attention is a fun, quirky title- check!

We've all heard of c*ck blocking, seems like guys love to whine a lot about getting the CB... But Clam Jam?! *dies laughing* apparently it's a real, honest to god term and so it would seem girls aren't so whiny about getting Clam Jammed cause this perv had never heard of it until this book!! Go figure.

So, fun, quirky title and cover aside, I had a really good feeling about this book! I'd never read any of Boldt's work before but after indulging in this little ditty, I'm a huge fan!

Nothing like getting down to the nitty-gritty details of a break-up to get the story line moving!
After kicking her finance to the curb, Maggie is in a bit of financial trouble when it comes to paying her rent. Advertising her need for a roommate it where the delectable Ryland James comes into play. Eeeep! Live in eye-candy who claims to be gay. Just what Maggie needs without the temptation *wink*

'It means you need to upgrade things from the Basic Clam Jam package to the Deluxe one.'

Clam Jam, gah!! Such an addictive, fun read with loads of hilarious hi-jinks and banter. Told from dual POV, you'll get the inside scoop as to what Mags & Ry think of each other and life. This book was a hoot to read and really a truly epic friends to lovers story that you won't soon forget. Loaded with sizzle and swoon you won't be able to set this book aside until you've devoured it in it's entirety!

Who knew a little clam jamming and napkin messages could be so fun and gd cute!??!!?!