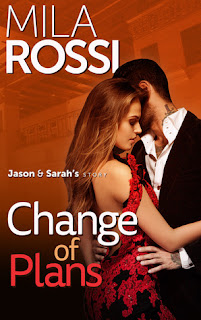 Sarah Thompson is a twenty-five year old girl on a mission: go to her friend’s office party, find an attractive guy and lose her virginity. When she meets rough and rugged Jason Hendricks, she knows she’s found her one-night-stand.

Jason knows about MMA fights and boxing. He doesn’t know jack about virgins and wants to keep it that way. When Sarah turns out to be just that instead of the experienced vixen she led him to believe, he’s in for the shock of his life.

Trying to move on from their disastrous night is easier said than done, as Jason’s guilty conscience can’t let the sweet, brown-eyed girl go. Determined to show her a good time, he tries to convince her that a redo of their time together is a must. Sarah is tempted, but can she stick to her promise and give in only to lust, or will she fall for the brooding fighter?

I received an ARC of this book for an honest review.  Before reading Change of Plans, I had never heard of Mila Rossi.  I read the synopsis and was sold when I saw it involved an MMA fighter.  What can I say, I'm as sucker for them.  LOL  I'm glad I said yes to this one, because it had a good storyline and it was a quick read, which I like sometimes.

Change of Plans was about a 25 year old virgin who really just wanted to change that and what better way to do so than with a one night stand.  She could accomplish that in one night and not have to worry about the pressures or distractions of having a boyfriend (which she didn't have time for).  Wam! Bam! Thank you Ma'am! Don't let the door hit you on the way out kind of thing.  Well, it didn't quite go the way Sarah Thompson wanted it to go.

Sarah, a student studying to get her PhD in Cultural Anthropology, goes to a party with her best friend looking like she's ready for a good time.  Sarah meets tattooed hottie Jason Hendricks (an MMA fighter/trainer) who seems to be looking for a good time.  Perfect, right?  They talk, they flirt, they go up to Jason's hotel room for a quick romp in the hay so to speak.  Things are hot and heavy for a bit and then BAM!  Jason realizes she's a virgin.  Scratch that...she WAS a virgin.   Oh crap!  He doesn't do virgins!  He doesn't know what to do with a virgin.  Jason kind of freaks.  He made her get dressed and took her back to the party.  Then he left.  Left her there wondering what the hell just happened.

I loved the idea of this story as I don't mind reading about girls who haven't lost their virginity yet.  The start of this book was a little rushed for me, but once it got to Sarah losing her V-card, things slowed down a bit and I was able to enjoy the details and conversations going on in the story.  I stayed up late one night reading, because I needed to find out what was happening between them and where Mila was taking these characters. Oh and the sex?  HOT HOT HOT!!  For being a virgin, she sure learned a lot from the porn she would watch.  LOL!

All in all this was a fun, romantic story where even though you're not looking to find love, it can come knocking at your door when you're least expecting it.   Sarah and Jason fought it. They really did, but it was a hard task to accomplish.  Did they go their separate ways or did they get the happy ending I wanted?  Read it to find out.  :)

Thank you Mila Rossi for giving me the opportunity to read this book.  I thoroughly enjoyed it!

Posted by Unknown at 7:18 PM No comments: