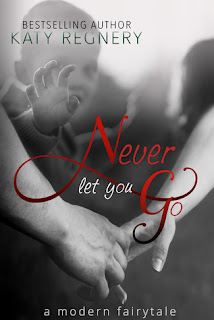 In this modern retelling of Hansel and Gretel, thirteen-year-old foster children Griselda and Holden escape from their abductor after three years of brutal captivity, and try to cross the Shenandoah River on foot. Tragically, one of them makes it to safety, but the other is left behind.

Ten years later, Griselda's boyfriend drags her to a fight club grudge match, and her world is turned upside down when she watches Holden step into the ring.

Though the connection between them is fierce, bitter regret, simmering rage, and a tangle of physical and emotional scars lie between them, just as dangerous as the white water of the Shenandoah.

Never Let You Go is a story of fear and hope, defeat and survival, and two people--once profoundly broken--who discover that love is the only thing that can make them whole again.

This is a standalone novel inspired by Hansel and Gretel.

New Adult Contemporary Romance: Due to profanity, scenes of physical abuse and very strong sexual content, this book is not intended for readers under the age of 18. (Note: Children are not sexually abused in this book.)

For June and July 2015, 25% of all gross royalties will be donated to the Elizabeth Smart Foundation.

ARC provided by Netgalley for an honest review

Ohhhhh this book hurt my heart so much. This was a very emotional read for me. These two characters went through so much together that made their bond unbreakable. From a very young age Griselda and Holden had it rough. They were both bounced around from foster home to foster home and at most all of them they weren’t treated very well. One day when they are thrown together to run an errand for their new foster family something very tragic happens to them, something that will change their lives forever. For years all they will have is each other and somehow in a horrible place they manage to find love and solace with one another, but when they are separated will the bond they formed be enough to hold them together until they meet again or will all the bad things that happened to them destroy their chance at finding happiness?

Griselda & Holden are two broken souls and rightfully so after enduring what they did. They are both looking some redemption and living with a lot of guilt not knowing what really happened on that fateful day. What they do know is that they are drawn to one another and can’t stop thinking about each other no matter how much time they spend apart and they also seem to need one another in order to heal themselves.

Like I said in the beginning this book is heartbreaking. It will gut you and there were times that I thought I just can’t take anymore but then the Author pulls you back in and gives you some symbol of happiness to come and that keeps you going through the hard times. I thought these characters were exceptionally strong after going through everything they did, they were broken but they didn’t want to be.

The thing that got me the most about this book is unfortunately it is so close to real life. Things like this happen way more than they should. It makes you think to yourself what can you do to help and it really opens your eyes more to all the ugliness in the world. I commend the Author for tackling a hard subject that had to really be emotional to write about. All in all this did turn out to be a beautiful love story and a story about finding redemption and love in a life where it didn’t exist before.

*The only reason I didn’t give this book 5 stars was because I did feel in parts that it moved slower than I would have liked it to. *