Review: Lost In Between by K.L. Kreig 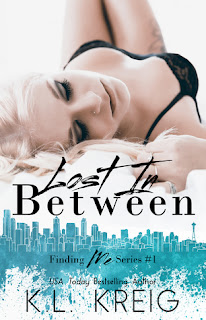 We all have one.

That magic number that will get us to agree to do anything, be anything.

Don’t sit on your gold-plated high horse and say you don’t because you do. Everyone does. Each of us has something we covet enough that we’d sell ourselves to have it.

What’s my tipping point, you ask? Apparently a cool quarter mil will do the trick.

What does one do for 250 large, you wonder? Anything the infamous, gorgeous playboy of Seattle wants. For the next four months I’ll be Shaw Mercer’s arm candy, his beck and call girl, his faux girlfriend. I’ll be his to command, mold, push and pull in any direction he sees fit.


*If dirty-talking, dominant alphas are not your thing, move along. Mature, 18+ only. Book 1 in a 2-part duet.

*skips around chanting* I just lost my K.L. Kreig virginity!

What a freaking awesome reading adventure this tasty little morsel of a tease was!! Delightfully sinful, Lost in Between was... well hell... it was delicious once I got into the meaty layers of story line. I will admit I had some difficulty getting in to it at first BUT once I hit the ~20% mark, gloves came off, pages were rapidly tapped (lol), shit was about to happen, as in I. WILL. DEVOUR. YOU! Errrrrmahgerrrd I need the next book STAT!!! This is an emergency!!

'I've never met a man who seems to see into the real me. All the way into the blackest of the black. It's impossible. I'm too shrouded. Impenetrable. A steel fortress. Not even the man I was engaged to could pierce that dark place, and he tried for three years. But I also can't deny that's what I felt when I gazed up his six-two frame into eyes that dove right into my very center.'

Willow and Shaw essentially come from two different worlds, she's struggling to survive and he is a thriving CEO. Initially this book starts off and reads (to me) as two different stories but when their worlds merge and collide, hell, all bets are off *wink* Things are about to get hottttttt!!!! Oh yeah! Pull the freakin' alarm!!

'Shaw Mercer. He's what? Gorgeous? Check. Commanding? Check. Larger that life? Double check. Possesses mind-altering sex appeal? God, if I could fit a dozen checks in this box, I would.'

Their chemistry is off the charts! Their internal conflict, demons and baggage are complete turmoil inducing. The push and pull, the want and struggle to not cave to baser needs... OMG. Yeah, I have no fingernails left... ugh. BUT it was so worth the pain!!!

There are so many layers and aspects to Lost in Between is it's cast of characters, I just don't even know where to begin without spoiling anything. So I'm not saying crap about crap lol You'll definitely want to check out this book!!! Sit back and enjoy the ride and suffer out the wait for book 2 with me :D

'Love.
Four simple letters, one single syllable.
Seemingly straightforward in its definition, but it's far from that. It's complex and confusing. It's contradictory, paradoxical if you stop to really think about it.'