Review: That One Day by Josie Wright 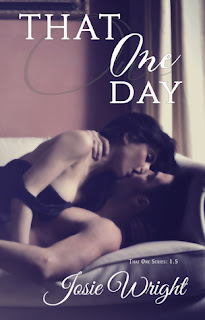 So I leave, searching for the truth hidden behind a web of lies.

The only thing I take with me, besides a bag of clothes, is the memory of one night. That one night with Frankie, my best friend’s little sister. The woman I have loved as long as I can remember.

The memory is what keeps me going when I learn the truth. It’s what keeps me sane when I feel like I’m losing my mind. And, it's what drives me back to a life I ran from eighteen months ago.

Yet, nothing is the way it used to be. Frankie has a secret. One that changes everything. Changes who I am. Letting her go is not an option. I have to make her trust me. I need to make her mine.

But I have a secret of my own. One that keeps me awake at night. A secret that could make me lose Frankie forever. It’s not a chance I can take.


Not suitable for under 18's due to strong language, violence and sexual content

*Though this book can be read as a standalone, it's recommended to read 'That One Night' first to get the full picture.

Review by Amanda (ARC provided for an honest review)

I absolutely adored this book!!! Josie Wright snared my attention with That One Day and I often wondered what Ben had been up to those 18 months he disappeared...

This book was extremely well written and grabbed my attention in the first chapter and never let me go!!! It was so amazing seeing Ben's thoughts and feelings about the turmoil that happened in his life!!! This book was full of angst, heartbreak, laughter and love!! It was great to get answers about what he was up to for the time he was missing. His new friends were hilarious. I highly recommend this book to anyone and everyone!!! I am a Josie Wright fan for life! Way to rock it girl!!!

Posted by Unknown at 6:25 PM No comments: 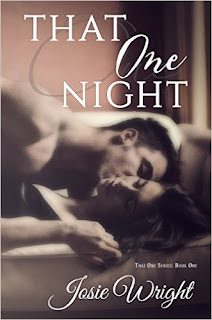 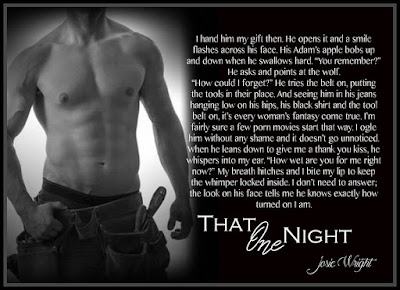 Josie Wright has always been a bookworm, spending every free moment with her nose buried in a book. While others were out partying, she spent her evenings with Heathcliff, Sydney Carton or Snape. Romance, fantasy, thrillers - you name it, she read it.

Thanks to the Kindle, she finally arrived in the 21St century and discovered the Indie literature world. Josie has been lost to it ever since. With her love for the written word and her promiscuous feelings for countless book boyfriends, the next logical step was to start writing. The voices in her head and her imaginary friends wanted out to play and so she wrote her debut novel "That One Night", that's to be released early summer 2015. And the good news is, there are more voices and imaginary friend where Ben and Frankie came from.

Josie is a financial expert by day and a writing junkie by night. The rest of the time she's a bit of a hippie, a bit of a goth and many things in between. Josie loves to spend time with her husband when she can tear herself away from her book boyfriends. She loves video games, movies, good food and even better music. She's addicted to chips, long baths and shoes. Oh, and books of course. Definitely books.


-Do you have a quirky thing you do when you are writing? You mean other than overeating? Then no.

-How do get ideas for your books? It can be a song, an ad, a single thought. Often it will be a situation I come across and my mind just takes off.

-What made you want to become a writer? I've always had stories in my head, but never really the courage to put them on paper and share them. It took my husband getting ill to realize life is way too short to not take risks and not do the things you feel passionate about.

-Who is THE ONE Author that makes you fangirl? That's like picking a favorite child.
Impossible. Currently, I'm really fangirling over Keri Lake. "Ricochet" has knocked me off my feat.

-What is your most favorite book that you have read? Is there a reason you're trying to torture me with those questions?!?! Lol. There are so many fantastic books from so many fabulous authors. My spontaneous answer: Sadie's Mountain by Shelby Rebecca

-What television shows do you watch the most? The Walking Dead. I love it. I'm obsessed and addicted. Best show ever.

-Let’s play Best Friend, Boyfriend or Brother….name who you would put in each category. It can be celebrities, book boyfriends, models or anyone you want. Best Friend: Emma Stone; Boyfriend: Kiefer Sutherland; Brother: Norman Reedus

-What are the top 3 items on your bucket list? Now that one of those things came true and I published my first book, the ones I can currently think of are: Visit Ireland, see Metallica live and do a yoga retreat.

-Who is the person that has influence you the most in your life? Besides my parents and my hubby, I'd say it's the two people my book is dedicated to. My great-grandmother and my best friend.

-What is your favorite movie of all time? Seriously, just one movie? Wow. That's really mean. I've been contemplating this for twenty minutes, asking myself which movie I could watch every day for the rest of my life. The winner is: "The Crow" with Brandon Lee

-Cat or dog? I'm definitely a cat person. If I wouldn't have met my husband, I'd be a crazy cat lady sharing my house with 20+ cats. I think I should go and thank him for saving me from this fate.

-What is your favorite genre of music to listen to? Honestly, there is too much good music out there to limit myself to just one genre. I'm a sucker for good lyrics though.

-If you had to play a theme song each morning what would it be? Well, for a while it was "The Game" by Motörhead. I listened to it every morning multiple times - that was when I had some issues with my now ex-boss. The song helped me to get in the right mindset to deal with his tantrums and mind games. These days it would be "A Deeper Love" by Aretha Franklin.

Email ThisBlogThis!Share to TwitterShare to FacebookShare to Pinterest
Labels: Josie Wright, Who Wrote That Book Wednesday

Review: That One Night by Josie Wright 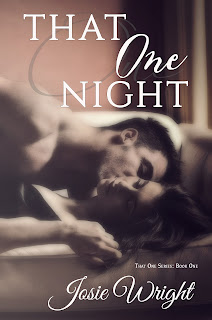 Not suitable for under 18's due to strong language, violence and sexual content

Purchase That One Night on Amazon

ARC Received for an honest review

This is Josie Wright’s debut novel but after reading it you would never know that. She can definitely write and spin and beautiful love story that will keep you on your toes and wrapped up in it until the very end. I will be keeping an eye out for more books to come by her.

That One Night is about Frankie (Francine) & Ben. They have known one another most of their lives and during that time Frankie has always had a crush on Ben but Ben did not reciprocate those feelings UNTIL one night changes everything and life as they know it will cease to exist.


Eighteen months pass for Frankie with no word from Ben at all. No one knows what happened to him or where he is until one day he resurfaces.


This is a story about forgiveness. So many things happen in this story that just grab your heart, you can feel the hurt and confusion coming from the characters. This is also a story about finding your way in life and knowing who you are and where you came from which I think is important for all of us to know. And lastly but not least it’s about strength and making a life for yourself. The characters are feisty and not afraid to speak up to one another and at times it gets pretty funny.


“It’s called karma, Ben. She is a vengeful little bitch”


That part had me cracking up along with so many others.

These characters had great chemistry, funny banter and worked really well with one another. Overall this was a great little read and I enjoyed it very much!

Arc received for an honest review

I absolutely loved this book!!! It was a breath of fresh air not the same old same old! . The storyline was different and had me hooked from the first chapter. I pretty much read it in one sitting!! I loved Frankie and how she grew as a woman and was so selfless even tho she was taking a lot of crap for it!!! I loved Ben and how he became a man and took responsibility no questions asked. I loved their little makeshift family! This book had just the right amount of funny, romance, angst and suspense!!! I loved every minute of it. Josie is now one of my go to authors that I will be reading everything she writes without even reading the synopsis! . Hands down one of the best books I've read in 2015!! And even more amazing is its her debut novel. Well done!! Xo