Release Blitz: Out Of The Blue by Carina Adams 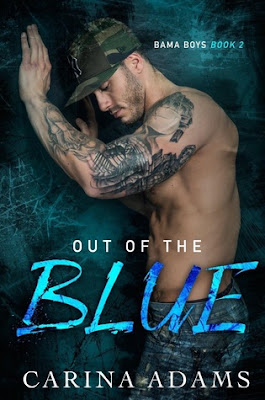 
*This book is #2 in the 'Bama Boys series. While it can be read as a standalone, it is a continuation of book #1 and is meant to be read after Forever Red.*


Excerpt:
The knock on the door drifted through my dreams, but I wasn’t ready to greet the day. An arm tightened around me, bringing my back closer to a toned chest, and I smiled. Last night had been amazing. So had this morning when Mike had woken me up with his tongue.
There were many things I’d seen while on tour with Nate—national monuments, wonders of the world, Mother Nature’s miracles. Nothing, and I mean nothing, was better than waking up to the view of Mike’s face between my thighs. The thought alone had me squeezing my legs together and pushing back into his warmth.
I had just started to drift back into unconsciousness when a door shut somewhere in the distance.
“Wakey, wakey, eggs and bakey!” Lia’s voice, way too perky that early in the morning, called out from the porch.
Mike growled out an inaudible response in his sleep, and I smiled, in complete agreement. When she called again, though, my subconscious wouldn’t let me ignore it and I was suddenly very awake. And very naked. Next to an equally bare Mike. I sat up in a panic.
Lia was leaning against the open French doors, laughing silently. “Morning, sunshine.”
Not only was she too energetic after drinking as much as she had the night before, she was too fucking happy about walking in on us. “This isn’t what it looks like.”
Her laughter bubbled out. “No?”
Before I could answer, a thick arm wrapped itself around my waist, making me jump in surprise, and pulled me back to the bed. Rolling over me, so his back was to the door, sheltering me, he kissed the tip of my nose. “Hello, beautiful.” He didn’t let me respond before he lifted his middle finger toward our friend. “It’s exactly what it looks like. Now fuck off.”
“I really wish I could.” The joy in her voice was clear, making me roll my eyes. “But we have to be on the road in fifteen minutes.”
“Ever hear of a fucking phone?” Mike asked, irritation clear. 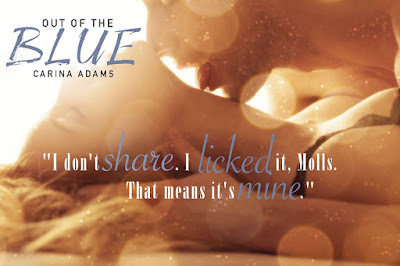 Meet The Author
Carina Adams has been writing and creating characters for as long as she can remember, allowing her to fall in love with the next man of her dreams with every new story.
Thankfully, fate stepped in and granted her the ultimate wish - a life full of men. Carina lives in a picturesque New England town with her husband, the man who ruined the thought of all others, and two amazing sons who always keep her on her toes.
Carina received her MBA in May, but would much rather play with her imaginary friends (the voices in her head) than work her 8 to 5. When she isn’t trying to juggle being a working mom with karate and football practices, surprising her children with her sci-fi movie knowledge, or writing, you can find her with her nose pressed against her kindle, laughing with friends, or living life vicariously as her Derby Girl persona, Writers Block.
Carina is the author the of Bastards MC series and best selling Forever Red. She is currently writing Out of The Blue, the follow up to Forever Red. She loves to hear feedback from her readers, no matter what type. You can email her at:carinaadamsweites@gmail.com
Author links
Twitter   Facebook  Goodreads

Posted by Unknown at 5:00 AM No comments: