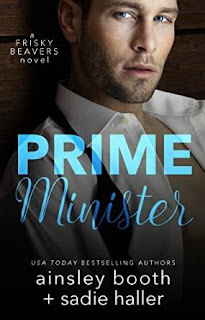 Now a USA Today Bestselling novel!
A kinky Prime Minister, a vanilla intern, and a scandal that shouldn't feel so right or cost so much.

Gavin:
Ellie Montague is smart, sensitive, and so gorgeous it hurts to look at her. She’s also an intern in my office. The office of the Prime Minister of Canada.*
That’s me. The PM.
She calls me that because when she calls me Sir, I get hard and she gets flustered, and as long as she’s my intern, I can’t twist my hands in her strawberry-blonde hair and show her what else I’d like her to do with that pretty pink mouth.**

Ellie:
How much I like the PM varies on a daily basis. He’s intense, controlling, and a perfectionist in every way—and he demands the same of his staff.
How much I want him never wavers.
There’s something about him that tugs at me deep inside, and makes me wish that just once he’d cross the line in a late night work session. I’d take that secret to the grave if it meant I got a taste of the barely restrained beast inside him.***

Review by April (ARC provided via NetGalley for an honest review)

Canadian politics have never been so deliciously arousing and off the charts HOT! Ainsley Booth and Sadie Haller joined forces and collaboratively wrote one heck of an insanely addictive and truly unique Canadian story line-one that is sure to stimulate the senses and then some. *Wink* It might have you sliding right off the chair you're sitting on LOL. Steamy & definitely slippery when wet.

A story of forbidden love centered around Canada's youngest, hottest and newly elected Prime Minister, Gavin Strong, and his summer intern, Ellie Montague. The taboo factor is almost ScAnDaLoUs! SQUEE!!! I have a soft spot for all things forbidden and taboo when it comes to reading. A -not so- guilty pleasure of mine, that I love to indulge in aaaaand Prime Minister delivered-hands down! *fans self*

This book is beyond hot!
"It's not just her looks, although she does have an ass that is just begging to be spanked. She's got brains and spunk. Seriously smart and deliciously sassy, and I love that."

With a past and penchant for kink, Gavin isn't one to deprive himself for (too) long of his wants and needs. Lusting at first sight and sexually charged day dreams of Ellie, I knew this was going to be AH-MAZ-ING! The sexual tension and chemistry between Gavin and his Sprite is just *happy sigh*
"There's definitely something about him, a heat that's impossible to resist, but safe at the same time."

Ellie, she may be 14 years his junior and seem somewhat innocent and shy BUT girlfriend has some carnal desires and fantasies playing out in her head with Gavin.
'I want to bang the PM.' and after reading this book, so do I...so do I. *sigh*

What happens in the PM's office, sometimes leads to fun between the sheets at 24 Sussex Dr. 'Act in haste, repent at leisure.'

I had so much fun reading Prime Minister! If you're looking for a fun read that's full of swoon, sizzle and wit, then look no further! The complex story line and cast of characters will captive you and own your attention. This is one of the best books I've read this year and now I'm left in hangover hell, impatiently awaiting the next book in the Frisky Beavers series.