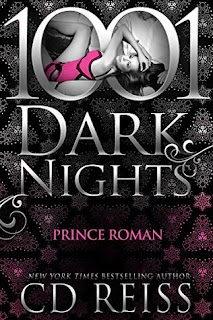 From NY Times Bestselling author, CD Reiss, love comes in the most ordinary and most forbidden places.

I’m playing it cool, clean, and professional…until I meet Roman Bianchi. He’s not an insecure nerd or an ego-hole like the other kings of Silicon Valley. He’s charming and handsome. He’s fun, funny, and smart.

He’s also in the office across the hall.

Two broken rules waiting to happen.
I can’t lose this job over some guy.
But Roman’s not just some guy. Under that suit and cocky smile, he’s a prince.

4 'I wanted to be her stability, not her chaos.' Stars

A little nerdy and a whole lot dirtaaaaay! Things are getting hot in SV and I'm not talking about the temperature rising *wink* I really enjoyed this novella by C.D. Reiss, her books and words pack a powerful punch that always leave a lasting impression, making me crave more, more, moreeeeee!!

Prince Roman takes us on a little forbidden inter-office flingaroo, which is highly frowned upon due in part to the company's no-fraternizing policy. But hey, forbidden is where it's at for this reader! I was introduced to Raven who is not new to office shenanigans, if you catch my drift. She's fierce,  intelligent, and has a goal of permanence at her new place of employment which equals no office 'D'.  That's all fine and dandy until her eyes land on Roman Bianchi, the hot AF lawyer who's office is across the hall from hers.

But...
Office D is ok if it happens outside the office & no body finds out...
The thing is... someone is always watching...
So scandalous.

The risks you take when you find the one, what you'll give up to make it work. GD, Roman Bianchi know what he wants, what his heart wants, and he won't give it up for his lifelong dreams.