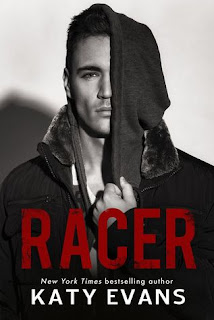 A bad boy with something to prove.
A woman with a mission.
The race of their lives.
The love of a lifetime.

I don’t think his parents expected him to live up to his name—Racer Tate—but once he felt the adrenaline rush behind the wheel, he was addicted.

He's the fastest, fiercest driver around.

Scouting new talent brings me to his doorstep...
but his smile sends me to my knees.

The sexy, mysterious Racer Tate is not the kind of man a girl like me falls for. He's secretive, reckless, elusive. But his proximity pushes me beyond reason, and his kiss....

This is our last chance to win, and he is our only hope. I'm supposed to watch him—make sure he doesn't get into trouble. But it's an impossible task. And now the one in heart wrenching, toe-curling, soul-crushing trouble is me. Because when your heart belongs to someone, their truths become your own, and their secrets become your salvation...or your curse.

He says he wants me. He says I'm the One. But he also thinks he'll break my heart, one piece at a time until it's gone.

Katy Evan's delivers an emotional smack-down to her readers once again with another insanely spellbinding, steamy, panty melting, and intense installment in the REAL series by giving us RACER!!!! The one and only son of Remington Tate, our beloved Remy of Real... and Brooke, and, and, and I JUST CAN'T EVEN!

'I want inside her. And I want it slowly. Breathe in her neck. Whisper in her ear. Make her remember the feel of me inside her when she's not with me. I want her to move beneath me, scream my name, let me taste her mouth taste and see the color of each damned moan.'

The apple didn't fall far from the tree when it comes to Racer Tate, he most certainly is a chip off the old block *wink* Like father, like son. The intensity was off the charts as Katy Evans weaves and spins the heck out of the the emotional highs and lows; never slowing, going full throttle around every twist and turn throughout the course of Racer and Lana's story. There are so many layers to this book and they meld so perfectly, creating an ending that made me sit and hug my e-reader for a while. So, so, so perfect!! GAH!

'Rome wasn't built in a day... and nobody said it was easy to fall in love with a Tate.'

Even the bluest of blue eyes have their dark days, not shying away from mental illness, Katy Evans delves deep within Racer to bring his whole being and essence to the forefront for readers to grasp all the "ugly" that lurks within which isn't all that ugly and terrible at all with the right people by your side. Challenges are met and faced for both Racer and his Crasher with an outcome I didn't see coming! You just need to read this book now! Take it for a spin, you won't be disappointed :)

"I want you, your whole being, your entire you."