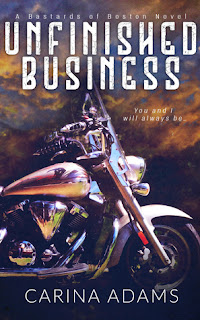 The Bastards of Boston live in a world most don't understand. They follow their own rules, only accountable to each other, the innocents they protect, and the people they couldn't save.

As president of the Bastards MC, Robert Doyle is the man behind it all. It’s his responsibility to keep his club safe, to be the smartest man in the room, and be ten steps ahead of everyone. He’d give everything he had, and sell his soul to the devil, to protect the ones he loves.

Until Rocker comes face-to-face with the pain he thought he’d buried. Old wounds are ripped open. Revenge consumes him. Once again he’s the teenager desperate to avenge his daughter’s murder and nothing else matters.

He calls me his angel, but the halo I wear caught fire a long time ago. There is no line I won’t cross, no law I won’t break. I’ll do whatever it takes to save him. If the road to hell is paved with good intentions, I’ll happily burn.

When past and present collide, we’re in for one hell of a bumpy ride.

5 'It's when love and hate collide.' Stars

Passionate, gritty, and emotionally gripping! Carina Adams returns to her writing roots and delivers  one hell a phenomenal story! MC baby!!! I knew Rocker's story would rock my world, but what I didn't realize was that it would turn it upside down- over and over again. Holy emotionally crippling baggage, batman! That was one INTENSE ride! And because it's Rocker I'd take that ride over and over again *wink*

'You can run with the lies from your past. But you can't hide from the truth forever.'

Unfinished Business is a book that will stick with you long after you've read the last page. The journey that Rocker and Cris have been on; emotionally, physically, mentally- is definitely one that will stick with you. Abuse, heart-ache, many obstacles to endure and overcome, while they've survived, they're not left without scars and reminders of the battles they've fought and won.

'The need to protect her was pure instinct. One damaged person shielding another. I'd move heaven and hell to make sure she was safe.'

This book is one that I couldn't read fast enough, yet couldn't read slow enough. Absorbed and completely drawn into the story, I breathed and lived every emotional facet of the story line. Carina Adams has outdone herself with his book and has blown my mind! Hands down my top fave work of hers to date!

A must read of 2017! It's powerful and raw! Don't miss out on this Bastards of Boston MC!!