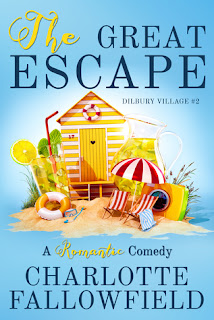 A laugh-out-loud novel from Charlotte Fallowfield, Amazon UK #1 bestselling contemporary romance author of Until We Collide.

A tropical beach paradise in Mexico was the last place Georgie Basset expected her decimated heart to be jump-started again, not after she’d been jilted the year before by her fiancé, leading to said breakage. But when she spotted Weston Argent jogging along the beach, all bronzed with ripped muscles like some Greek God out of a modern day Baywatch scene, she nearly choked on her cocktail. She knew immediately she was in trouble, she’d never reacted so strongly to a man on first glance.

However, after a disastrous first date with him, she headed back home to Dilbury, resigned to never seeing him again. That is, until Weston turned up unexpectedly at her dog grooming parlour with Bertie the French bulldog, a species she had a real weakness for. She couldn’t help but wonder if fate was playing a helping hand. But each time she saw him, their encounters never went smoothly, resulting in some mortifying and hilarious escapades. Despite their undeniable attraction, there was something about Weston that she couldn’t quite put her finger on, something that concerned her.

When the truth finally came to light, Georgie was convinced that all men were dogs, except she knew that was an insult to dogkind. Ever the meddler, her best friend, Abbie, intervened, knowing in her heart that despite what had happened, Weston was full of good intentions, and was undoubtedly Georgie’s Prince Charming.

The question remained, could he convince Georgie of that, or would he forever remain in the dog house?

While The Great Escape is a standalone story, it's the second in the Dilbury Village series of romantic comedy novels. All of them will be set in the quaint fictitious English hamlet in the Shropshire countryside, but feature a different village couples' story.

Warning, if you are of a sensitive disposition when it comes to toilet humour, then the Dilbury Village series may not be for you!

4 'I think there's going to be a time zone change.'Stars

Prepare to laugh your way through this heartwarming and ever so charming second installment of the Dilbury Village Series. Charlotte Fallowfield returns with guns blazing with her no holds bar humour and wit bursting off the pages of The Great Escape as Georgie Basset takes her turn on the great quest for love with her best friends at her side.

Georgie hasn't had the best luck when it comes to love, it's a fickle bitch at the best of times and she's been burnt- to a black bloody crisp. Needless to say she's reluctant to open her heart but, once she sees the handsome Weston running on the Mexican shore... well, I can't blame her *wink* I mean what else is a single girl to do while on vacation, oogle the sand?! Pfffft!!

'Georgeous,' I replied, putting my hand in his. I felt faint as he wrapped his fingers tightly around my hand, which quivered from the sensation that sparked all of my nerve endings. Oh shit. Had I just said gorgeous out loud? 'Georgie, I mean my name is Georgie, not gorgeous. It's a bit presumptuous of me to call myself gorgeous, isn't it? And I wasn't saying it about you, no. NO, no, no. Not that you're not gorgeous. I mean you are, obviously, but ... oh God, I'm rambling, aren't I?' I uttered, my cheeks flaming.

From nervous ramblings, to turdgate 2.0, the joys of a blooming relationship; it's ups & downs and all around joys, let downs and happily ever afters. Everything and anything is possible and survivable with the love and support of your besties by your side! This is a book that you must read and experience first hand! It's British Rom-Com at it's best!

'Sometimes you have to hit rock bottom to decide what path you really want to take to climb back out of the hole you've found yourself in.'