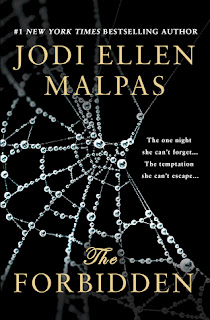 Annie has never experienced the 'spark' with a guy-that instant chemistry that renders you weak in the knees. That is, until a night out brings her face to face with the dangerously sexy and mysterious Jack. It's not just a spark that ignites between them. It's an explosion. Jack promises to consume Annie, and he fully delivers on that promise.

Overwhelmed by the intensity of their one night together, Annie slips out of their hotel room. She is certain that a man who's had such a powerful impact on her must be dangerous. She has no idea that he belongs to another. That he's forbidden.

ARC provided via the Publisher for an honest review

Whoa Jodi Ellen Malpas has done it again! I didn’t think she could make me love a character more than Jesse Ward from This Man but she sure as hell has gone and done it. I might even like Jack a tad bit more than Jesse.....maybe!

Now, Jodi starts this book off with a little bit of a warning for those readers who are sensitive on some subject matters but if you’re like me any book that comes with a warning (even a little one) I just have to have. The warning just makes me want to read it more..lol So I was rubbing my hands together feeling giddy as I was diving into this one.

Annie & Jack meet by chance one night and their chemistry is OFF THE CHARTS. I mean fog up your kindle and grab yourself a fan off the charts. Their attraction to one another is palpable. They both feel it right away and I as a reader felt it, but neither one is interested in acting on it, in fact it is forbidden for either of them to act upon it. Now, you know anything that is forbidden just makes you want it more right?

“He is just to f**king handsome for his own good. And, Undoubtedly, my good, too.”

Your emotions will be all over the place. (mine certainly were) BUT my heart was always in one place right from the start.

Forbidden has humor, sex, great characters, drama and love. All the things that make a great story. Jodi did not hold anything back writing this one, she brought out all of the feelings and conflict and it was nice to read a story where nothing was sugarcoated.

Phenomenal love story and definitely one of my favorites!