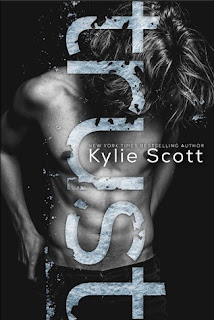 After being held hostage during a robbery at the local convenience store, seventeen year old Edie finds her attitude about life shattered. Unwilling to put up with the snobbery and bullying at her private school, she enrolls at the local public high school, crossing paths with John. The boy who risked his life to save hers. While Edie’s beginning to run wild, however, John’s just starting to settle down. After years of partying and dealing drugs with his older brother, he’s going straight—getting to class on time, and thinking about the future.

An unlikely bond grows between the two as John keeps Edie out of trouble and helps her broaden her horizons. But when he helps her out with another first—losing her virginity—their friendship gets complicated.

Meanwhile, Edie and John are pulled back into the dangerous world they narrowly escaped. They were lucky to survive the first time, but this time they have more to lose—each other.

What an astounding literary adventure. Holy. Shhhh....it! Sucked in from the first chapter, I knew this book was going to destroy me bit by bit then slowly repair my traumatized heart, soul, and mind. Be warned, try to be prepared... as Kylie Scott dives head first into YA and makes it her bitch!!!

The intensity and pace set from the beginning lures you in and holds you hostage. Unable to back away, to escape from Truth's clutches, I buckled in for the angst fueled ride through the emotional and mental turbulence set into motion by one innocent excursion for treats. Seriously though, I'll never look at a convenience store the same way again.

I couldn't put this book down! It consumed my life... it still is. The trauma, despair, grief, guilt, realism of events, the characters- EVERYTHING! Kylie Scott's writing continues to blow my mind with each new work of fiction she masterminds. I'm in awe. I'm in the middle of a freaking book hangover here, and I NEED MORE!!! Now. Please.

Edie Millen and John Cole, you can't get more polar opposite than these two. She's the quiet book nerd and scholar type. He's the ex-drug dealing bad boy with a reputation a mile long. After their worlds are sent spiraling off kilter and survivors guilt sets in, the two find a sort of solace/safe place in one another. They understand each other on a whole different level after surviving what they did that horrific night. Their friendship isn't easy, it's complicated and messy, especially after feelings start to form, and lust takes over.

She's trying to not give a f*** about the small stuff anymore.
He's trying to turn his life around for a better future.

GAH! Trust is one of those books that I wish I could read again for the first time. The feelings, and emotions evoked are unforgettable.  The whole experience of this story will be one of those that will not be forgotten, it's one of those gems that will constantly be in the back of your mind. Hands-down a top read of 2017!