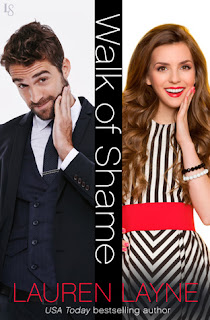 Sparks fly between a misunderstood New York socialite and a cynical divorce lawyer in this lively standalone rom-com from the USA Today bestselling author of Blurred Lines and Love Story.

Pampered heiress Georgianna Watkins has a party-girl image to maintain, but all the shopping and clubbing is starting to feel a little bit hollow—and a whole lot lonely. Though Georgie would never admit it, the highlights of her week are the mornings when she comes home at the same time as her uptight, workaholic neighbor is leaving to hit the gym and put in a long day at the office. Teasing him is the most fun Georgie’s had in years—and the fuel for all her naughtiest daydreams.

Celebrity divorce attorney Andrew Mulroney doesn’t have much time for women, especially spoiled tabloid princesses who spend more time on Page Six than at an actual job. Although Georgie’s drop-dead gorgeous, she’s also everything Andrew resents: the type of girl who inherited her penthouse instead of earning it. But after Andrew caps one of their predawn sparring sessions with a surprise kiss—a kiss that’s caught on camera—all of Manhattan is gossiping about whether they’re a real couple. And nobody’s more surprised than Andrew to find that the answer just might be yes.

Anytime that I get an opportunity to indulge in a Lauren Layne book. I take it!  So when I received an email offering an ARC of her newest novel I jumped at the chance to get my hands on it. This Author has been one of my favorites since I read her first book. Her writing is flawless. It draws you in right from the start. Her characters are real, likeable, flawed and just amazing. I have yet to read one of her books that I didn’t love.

Walk of Shame seemed a little different to me that some of Lauren’s other books. The writing a tad different but still just as remarkable.

Georgie is a young, rich party girl with very little responsibilities. Some may think she is irresponsible and self-centered but she isn’t. Andrew is Georgie’s uptight, condecending, socially awkward, workaholic well known divorce attorney. Georgie has a tremendous crush on him and she believes that Andrew doesn’t like her at all but what she doesn’t realize it that Andrew likes her a whole lot more than she could ever imagine.

These two characters were polar opposites but yet still the same in some ways. Their courtship to a relationship was definitely not without its ups and downs but I think Georgie did a great job at bringing Andrew out of his shell. Their banter is pretty amusing at times and will definitely keep you chuckling. Their love and their relationship grows slowly and at an even pace.

The plot is good, the second characters are good and this was just an all-around great read that I enjoyed very much!