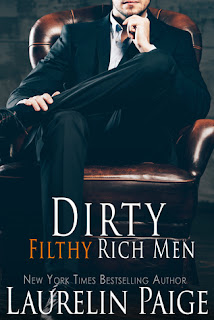 When I met Donovan Kincaid, I knew he was rich. I didn’t know he was filthy. Truth be told, I was only trying to get his best friend to notice me.

I knew poor scholarship girls like me didn't stand a chance against guys like Weston King and Donovan Kincaid, but I was in love with his world, their world, of parties and sex and power. I knew what I wanted—I knew who I wanted—until one night, their world tried to bite me back and Donovan saved me. He saved me, and then Weston finally noticed me, and I finally learned what it was to be in their world.

And then what it was like to lose it.

Ten years later, I’ve found my way back. Back to their world. Back to him.

This time, I’m ready. I've been down this road before, and I know all the dirty, filthy ways Donovan will try and wreck me.

But it’s hard to resist. Especially when I know how much I’ll like it.

THIS BOOK!!! OMFG! GAH!! Everything about Dirty Filthy Rich Men had me hanging on the edge of insanity. Every. Single. Thing. Laurelin Paige has a knack for writing the most tantalizing, sexy, addictive, and frustrating alpha men EVER. They're simply in a complicated elitist league of their own, and gd if each one doesn't own a little piece of me in one form or another. They take what they want, no holds bar. You will belong to them. They will OWN YOU. It all makes me quite giddy *squeee*!!! Oh yeah! I'm putty in their filthy rich hands, a tortured puddle of goo -le sigh-

'They were both standing in front of me now, staring at me. Weston to my right, Donovan to my left, like a real life game of This or That, and of course my choice what This. It was the only choice. Practically. For my sanity. The other one wasn't even an actual option. And yet my body pulled traitorously toward That.'

Nothing is as it seems when it comes to Weston King and Donovan Kincaid. They are two peas in a pod, ruthless in all things life. Conniving, scheming, life was a huge game to these two, a ruse- one after the other. Yet my heart still melted for them, craved every moment spent with them. I couldn't read this book fast enough! My level of intrigue was off the charts, it still is. I'm so screwed.

'... I could recognize the futility of fighting for him and walk the hell away. But it wasn't that easy. It was thread upon thread of complicated, so many strands between us that wove us together...'

Ten years wasn't long enough to erase the memory, emotions, and feels of an unfortunate short lived stent at Harvard. Just as I am unable escape the clutches of King and Kincaid, Sabrina Lind is essentially screwed when it comes to this powerful duo. I'm a tad jealous of her, but why? She's a mere puppet in their game of string pulling. GAH!

'I was a girl who knew what was good for me. Immediately, I fell to my knees.'

I LOVE story lines and characters that frustrate me, those that really bring the feels and emotions out to play. The bigger the fictional a-hole, the more apt I am to fall for them. If you're in the mood for severe emotional and sexual whiplash then Dirty Filthy Rich Men is the book for you!!

'In the morning light, however, I found clarity.'