Review: This Is Reckless by Kennedy Fox 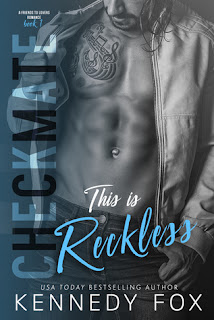 Introducing book 1 in the new Checkmate Duet Series from a secret duo of bestselling authors! This friends to lovers romance will have you swooning and laughing from the first to the last page! Are you ready to play the game?

Drew Fisher is the type of guy every girl wants.
Noble police officer by day, charming prince by night.
He has no idea the effect he has on women, especially me—his little sister’s best friend.

I’m the blonde Southern belle who lives up to the cliché, except I have my own quirks. I’m smart as a whip, can change my own oil, and recite The Pledge of Allegiance backward, but he doesn’t see that girl.

It’d be easier to forget him if he wasn’t my roommate and if the first thing I saw in the morning wasn't his shirtless body covered in tattoos. I’ve crushed on him since the day we met, but he’s made it perfectly clear where we stand. Just friends.

I know I need to move on and accept that his feelings will never be mutual, but every day he smiles at me, I’m left dreaming of what if.

He has girl issues, and I’ve got a crush I can’t deny.
We’re friends, but I want more.

One drunken hookup leaves us with much more than a platonic friendship. Pretending it never happened proves to be more difficult than anticipated.

A crazy ex-girlfriend, a dangerous war of stolen glances, and passionate kisses leads to the most reckless battle yet. I won’t be a pawn in his game, but I’ll play by his rules if it will show him I’m the one worth breaking them for.

*Recommend for ages 18+ due to sexual content and adult language.*

**This is book 1 of 2 in the Checkmate Duet Series--a friends to lovers romance. Highly recommended to read the Checkmate Duet, This is War and This is Love first, but not necessary. This can read as a standalone duet.**

5 'Wound up tighter than a virgin on prom night.' Stars

Ever since reading about Courtney and her insatiable hunger and lust for Drew throughout War and then again in Love, I'd been on pins and needles anxiously awaiting this baby to land in my kindle!
Needless to say, without a doubt, Checkmate: This is Reckless is one of my most anticipated books of 2017!

This! Book! Holy sweet hell! I knew it would be hotter than sin, cause well... Drew. *wink* Kennedy Fox have outdone themselves with this installment. I just can't even right now! How does one even begin to function after reading a book like THIS?!?! One so chock full of haaaawt, downright sinful characters, a book that I couldn't read fast enough! I think it's safe to say I am in love with the decadence and sweet torture that is Reckless!

'...giving into desires I hadn't even realized were there.'

Everything about this story captivated me into a full out fictional trance. I was definitely in the Checkmate Zone! Maaaan, I could really go for a blueberry muffin right about now hehehehe.

It was time to get out of the friend-zone once and for all. Oblivious to the expression Courtney always wore when glancing dreamy heart eyes his way, Drew was a typical male- absorbed in his own life and rocky relationship with the she-bitch who shall not be named. One day the axis shifted, angels sang, and Drew finally opened his eyes and saw what was in front of him for the first time.

They are perfect for each other!  Compatible in every way.

'It feels too right to be wrong, and I find myself questioning everything about us. Courtney is my best friend, my roommate, my partner in crime, and now she's mine. I don't know how this happened or how we got here, but I don't want it to end.'

OMG!! I cannot wait to get my little book nerd hands on the next installment! Kennedy Fox has created a greedy book whore in me when it comes to their sexxxxy, swoon worthy works.