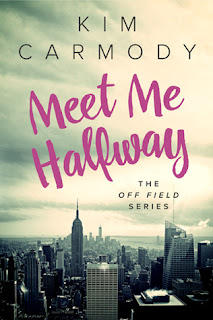 An ambitious journalist on a fast track to success.

A round one draft pick determined to keep his personal life his own.

And an attraction neither of them expected.

Olivia Callahan is a woman on a mission. When she lands a career defining opportunity in the male-dominated world of sports journalism, she knows it’s make or break time. Olivia’s boss has given her the green light to produce her very own documentary, and she’s not going to let anything get in the way of perfection.

After a few setbacks in college, Nate Sullivan is finally on his way to the big leagues as the newest recruit for the New York Warriors. Determined to put his somewhat colorful past behind him, Nate’s all about the straight and narrow as he sets out to prove he’s worthy of the first round draft pick that’s caused so much debate from fans and media.

The last thing Nate wants is to delve into stories from his past. But when his new team directs him to set the record straight, he has no choice but to cooperate with the feisty, determined reporter who shows up on campus. Olivia is thrilled that Nate Sullivan is her man. His colorful background is just the thing to take her story from memorable to award winning.

What neither of them expected is their attraction to one another, yet try as they might, determination gives way to temptation eventually. As Nate battles to protect his privacy and Olivia fights to produce the story of her career, they must decide what they’re willing to give up in order to gain each other.

ARC provided via Netgalley for an honest review

This book blew me away! The writing, the characters, the storyline, all of it was just exceptional. When I read the synopsis for this story and the reviews it definitely intrigued me but I was not prepared for just how good it really was.

Olivia is a strong and very driven character and when she is offered the story of her life she can’t wait to deliver it.

Nate is the newest up and coming first round draft pick for the New York Warriors so of course all of the world wants to know about him but Nate is shy and doesn’t want the world to intrude on his personal life.

You can see the dilemma right? In order for Olivia to get her story she is going to have to push Nate and well that could be hard considering she has a strong attraction to him.

The thing that I enjoyed most about this love story was the maturity of it. Nate is right out of college so you could expect there to be some childish games but there wasn’t. Their relationship developed slow and detailed. Their mutual respect for each other was always present and the storyline was just real and just a joy to read.

I have to remark about the writing though. Author Kim Carmody’s writing is excellent. It grabs you right at the first page. The connection she makes you feel to the characters is rare. It is almost as if you can see what you’re reading playing out like a movie or a show.

You should most certainly pick this one up. It’s a great read with a tad of everything in it! Just a perfect read!