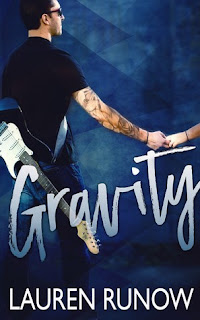 Lily
At eight years old, the boy next door changed my life. He was the force pulling me toward him despite our differences. It was like magic.
We understood each other, supported each other and in the process became everything to each other.
But in chasing Trevin’s dream, I lost myself along the way.

Trevin
Through tremendous heartache, she was there. Through fame and fortune, she was there. Loving Lily was the one thing I got right.
Eclipsing her in my shadow, I took from her until she was empty. Now I must do anything to prove I can be the man she wants, no, the man she deserves.

gravity
[grav-i-tee]
noun, plural gravities.
1. the force of attraction by which terrestrial bodies tend to fall toward the center of the earth.
2. heaviness or weight.
3. gravitation in general.
4. acceleration of gravity.
5. a unit of acceleration equal to the acceleration of gravity. Symbol: g.
6. serious or critical nature:
He seemed to ignore the gravity of his illness.
7. serious or dignified behavior; dignity; solemnity:
to preserve one's gravity in the midst of chaos.
1500-10; < Latin gravitāt- (stem of gravitās) heaviness, equivalent to grav (is) heavy, grave2+ -itāt- -ity

Gravity, by definition, it seems simple enough. A pulling force that grounds. And holy crap you guys!!! The gravitation pull is strong with this one! Once you crack into this book you won't be able to leave its vortex. Sucked in and whisked away to a fictional dreamland that I could not get enough of. After all, I devoured this book twice! Which is a huge deal when it comes to me and books. One & done is my motto.

There's nothing simple when it comes to words penned by Lauren Runow. This is not your quintessential cutesy childhood friends to lovers romance. Gravity is so much more than I ever imagined it could be. It's truly something spectacular, ONE book that encompasses 99% of everything that I've come to love in books. The highs and lows of love, off the charts angst, inner turmoil and regret, jubilant triumph, depth and emotions that leave you reeling. Add a dash of the rock-star lifestyle and the struggles of alcoholism and abuse, and, well, you've got yourself one hell of a book in your hands!

'My tiny piece of perfection. The portion of my heart that wanders the earth on the outside of my body. She sees me- the raw, unedited version of me... and she still loves me.'

The execution of Gravity was done with such delicate precision. Everything has a reason, no stone left unturned,  intertwining to come full circle. Gah! Such an addictive read!