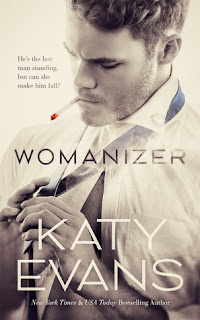 From New York Times and USA Today bestselling author Katy Evans comes a brand new contemporary romance. WOMANIZER is a full standalone, and no other books in the series need to be read.

We were just two strangers. Facing a forbidden attraction, a chemical connection. Neither of us expected or wanted it to amount to more.
But I had never been drawn to a guy the way I was drawn to this one: my brother's best friend, and CEO of the company where I interned.
Even knowing I should stay away, I proved to be too human, after all.
The chemistry was amazing.
The laughs were incredible.
I opened up to him in more ways than I'd opened up to anyone before.
But sex was as far as I'd go.
Just sex because he was too irresistible.
Just sex because I wouldn't be falling for him.
Just sex because I'd leave in three months, and I'd like for my brother not to kill me, and for nobody to find out he was my wicked little secret.
He wasn't the One.
He was just a womanizer.
But for a time, he would be mine

A Manwhore, Ladies Man & Womanizer walk into a bar...ok, I suck at jokes so lets try a review lol

This series! GAH! It's one of my top 5. I simply cannot get enough of these fun loving, super sexxxy men! I could read them forever-ever and never bore. Katy Evans has penned one heck of a delicious group of players who find their forever girl, the one who ruins them for all others, the one to tame their wild, wanton, player ways. The one who ultimately wins their heart. Its a swoon-fest page turner of feels and emotions from start to finish!

"He's like the testament to singleness. All his friends are taken, so now he's the last man standing."

Callan Carmichael, a name synonymous with wealth and being a merciless businessman. A name notorious around Chicago due to his Womanizing ways. Calculated, thorough, a stickler for perfection, and giving nothing better than your best- in life and in all matters relating to Carma, his conglomerate of multi billion-dollar companies. The man has a reputation. Heck, I was a bit intimidated at first. You know who wasn't, not the least bit intimidated? Olivia Roth. Yes, that's right. Tahoe's little sister *gets all giddy* OMG! YES! YES! YES!!!!

'I'm being kissed from the inside out. His hunger only feeds mine.'

How Livvy and Callan come to meet is definitely like a page out of a book! The innocence of Liv combined with EVERYTHING the encompasses Callan, her Hot Smoker Guy. You guys, I can't even right now! I was exactly like a giddy little girl on Christmas morning while devouring this latest installment in the series. Goofy smile plastered on my face, full on body chills and the fluttering and pitter-patter of my heart. Love is not an adequate enough word to describe my feelings about Womanizer! I fell hard and I fell completely in love with Callan and Livvy, but especially Callan! So much so, I'm considering changing my last name to Carmichael. I think it would have a nice ring to it.

This is a deliciously sexy story of facing your fears, realizing that sometimes its ok to break the mold. To re-write your plans as you go. Never set aside for tomorrow what you can do, have or become or be TODAY! Love happens when you least expect it. Grab hold and live, live, live! And, Man oh man! Those kisses!!!

'Climb the terrace we've built and come to the edge, and take a look, Olivia. I'm standing right there.'

With Saint & Tahoe being off the market, Callan Carmichael is now the lone surviving most eligible bachelor in the manwhore series. He can be ruthless in business. He has power, wealth and good looks. He is charming, confident and used to getting what he wants, when he wants it. And up until now no one has been able to hold his attention long enough to keep him for more than a night. That is until Olivia (Livvy) Roth comes to town.
Livvy is forbidden and should be totally off limits to Callan but when these two meet there is an undeniable attraction to one another. Neither can fight it and neither wants to fight it. Livvy is young and somewhat inexperienced but don’t let that fool you into thinking she doesn’t know what she wants or how to get it because she does and I loved that about her character. Some of the things that would come out of her mouth before she thought about it was hilarious and both characters had me laughing with their witty comebacks.

"I just wish I had your balls."
" Where exactly do you want them?"

I went into this story expecting one thing and I finished it being pleasantly surprised. I loved the banter between the characters and I adored how the story developed. Womanizer is funny, captivating, steamy, irresistible and romantic. It has a little bit of everything to keep you entertained and coming back for more.