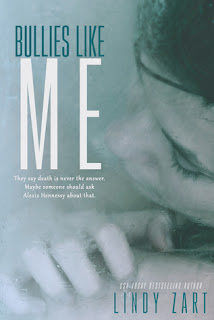 Alexis is the new girl at school, and she’s ruthlessly bullied. Hopeless, and drowning in her present reality, she takes pills—lots of pills. She’s sent to a mental health facility, where she meets a boy. Only the boy can’t save her, and no one can save her from herself.

Nick has secrets. He wants to open up to Alexis, but there’s the dead boy who haunts him. In his dreams. While he’s awake. He wants to be brave, but he can’t tell her about his past, and he can’t leave the facility.

Melanie rules over the school, until a nobody named Lexie tries to disrupt her reign. She won’t allow that. She also can’t stop it. She plummets into notoriety, but she’s determined to take them all with her. The girl, the boy, and their secrets.

5 'Sickness swims where victory should.' Stars

'They take, and they break, and they are without regret. They need to repent. Anyone they've hurt deserves an apology. I'll make sure they get it, even if I'm the only one who witnesses it.'

It's not often a book will bring me to my knees, rattle and shake my soul until it shatters. Bullies Like Me is a profound and raw telling of a very real and thriving epidemic that plagues the youth of present and past, an issue that is not to be ignored. I commend Lindy Zart for stepping away from the popular reads of today to feed us with one full of such soul shattering and heart wrenching substance. The emotions this one evoked within made my heart bleed and my soul cry.

'I feel like an interloper in my own skin and the real me is suffocating, struggling to exist beneath the misconceptions. She is losing- I am losing. And I can't help but think: what's this life for?'

With the many facets, levels, and depths of despair, feelings of hopelessness and glimmers of hope throughout. Lindy left no subject untouched. Told from multiple points of view, Bullies Like Me navigates through the lives of Alexis/Lexie, Nick, and Melanie, giving us a glimpse into the life of the bullied and the bully. It's quite disheartening and cruel as the reader delves deeper into the story line. Most definitely heavy content to take in. If suicide is a trigger, steer clear. There's no dance with death, it happens... or happened. You'd have to read to find out the finer details of what I imply.

'Twisted smiles and mocking laughter and beautiful ugly girls. Blackness. Hopelessness. The sensation of drowning in a version of myself I can't escape.'

Retribution, redemption, it all seems so simple in theory. When mixed with life and teens this book takes on a whole new game! Even though this one put me through the emotion wringer, I can't say enough amazing things about BLM. I live to read books just like this!! As morbid as it sounds, they feed my soul and give me hope for the world we live in and for future generations to stop the vicious cycle! Bullies like me was PHENOMENAL! Emotionally gripping and charged, you won't be able to put this book down until it's been devoured. Lindy Zart wrecked me with her words, in the most amazing way that only one hell of a well written book can!

'Death is easy; life is cruel. I still want life.'