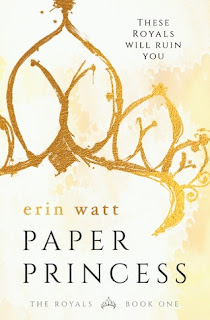 From strip clubs and truck stops to southern coast mansions and prep schools, one girl tries to stay true to herself.

These Royals will ruin you…

Ella Harper is a survivor—a pragmatic optimist. She’s spent her whole life moving from town to town with her flighty mother, struggling to make ends meet and believing that someday she’ll climb out of the gutter. After her mother’s death, Ella is truly alone.

Until Callum Royal appears, plucking Ella out of poverty and tossing her into his posh mansion among his five sons who all hate her. Each Royal boy is more magnetic than the last, but none as captivating as Reed Royal, the boy who is determined to send her back to the slums she came from.

Reed doesn’t want her. He says she doesn’t belong with the Royals.

Wealth. Excess. Deception. It’s like nothing Ella has ever experienced, and if she’s going to survive her time in the Royal palace, she’ll need to learn to issue her own Royal decrees.

Review by Jennifer (Copy provided for an honest review)

Watch out world there is a new family in town. They are very powerful and influential. They are sneaky and mischievous and the boys can be downright spiteful if you cross them. You would be well advised to not trust them, not even for a second BUT make no mistake, they will suck you into their world and you will love every agonizing minute of it. You will probably even ask for more by the time they are done with you. What family is this you ask, well… say hello to the THE ROYALS.

Ohhh this book was good! It grabs you from the first page. The heroine Ella is fantastic and is the perfect rival for these Royals. She didn’t take any crap of them or anyone else for that matter. She is strong, resilient and feisty and I loved her sparring with pretty much everyone in the story. She most definitely had her hands full throughout this book.

Reed Royal is a spoiled brat. He is used to getting anything he wants and he wants Ella gone or so he thinks he does. I didn’t start off liking Reed but he grew on me as the story progressed but when it ended I was right back to not knowing if I liked him or not. (you’ll see why once you read it) The tension between these two was ample and their hateful banter was something else entirely.

You gotta read this book. You have to meet these characters! There are so many twists and even more secrets you won’t know if you are coming or going and you sure the hell won’t trust anyone! Now, go buy it, clear you schedule and spend some time with the Royals.