Who Wrote That Book Wednesday: A Condo With Two Views by Al Daltrey 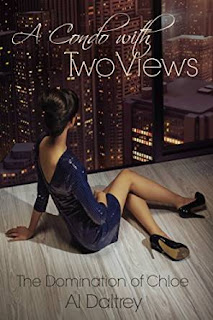 Men and women see the world differently, as do dominants and submissives. A Condo With Two Views is told from two perspectives: Jack's and Chloe's. Jack is a loving and protective husband, but with a kinky penchant for sharing his willing wife. Chloe is smart and strikingly beautiful, and obeys every command from her husband, no matter how perverse. Each gives their view of the story: one where Chloe must submit to a grungy caretaker, a sexy lesbian couple, an evil developer, an older sadist, and the list goes on. But what happens when she's pushed too far? Is the deep love of a husband and wife more powerful than the bond of a dominant and submissive? What will win out, love or bdsm? 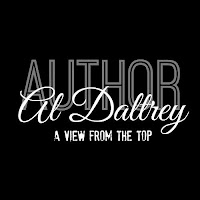 My career is in Marketing. When I started in the business it was all about the ever-powerful 30 second TV spot. Of course television is still important, but the toolbox is so much bigger nowadays: everything from social media to mobile to experiential. The younger execs seem more enthused about this new world of communications, but I found myself getting a bit bored with telling stories that had to be precisely 30 seconds.

I’d always been interested in BDSM. I like to say I was born with Dom blood. For me, it has to be fully consensual. Force completely defeats the purpose. The eroticism lies in the submissive wanting or least willing to endure the pain, punishment, and humiliation. I flipped open my laptop one day and started to write. ‘Testing the Submissive’ was written over a 90-day period. The novel is pure fiction and more extreme than anything I’d subject a submissive to in real life. The central character is pimped out and whipped extensively by men and women alike. As many reviewers say, this book is not for the faint of heart. That said, the reviews have been spectacular.

Over a couple of decades I was lucky enough to meet my fair share of submissive women. And don’t for a minute think these women were weak. Outside the bedroom they were confident, opinionated, gregarious and self-assured. However, inside the bedroom (to to speak) they wanted to feel the strong firm hand of a dominant man taking complete control.

One day I met someone special, and we’re happily settled, living in Canada.

My second novel, ‘A Condo With Two Views’ is written from the point-of-view of both the Dom and the sub, chapter by chapter.  If you're interested, check out the synopsis.

If you choose to read any of my work, I hope you enjoy it!

Author Interview:
-What is one thing that people do not know about you?That I am the world's worst guitar player.

-What is your most favorite book that you have read?I barely read. I know I shouldn't say this as an Author, but it's the truth. I get completely absorbed by music. I like movies when it's time to relax and escape, but I don't read nearly enough. In fact, I bet reading more would make me a better Author.

-What television shows do you watch the most?I've always enjoyed watching TV with my kids. As long as I was laying on the couch, and one of them was laying on my chest, or beside me, I was happy. So...we'd watch Franklin, then Little Bear, then the Suite Life of Zack and Cody.  We watched Zoey 101, and then So You Think You Can Dance.  Recently, up until Joan Rivers died, we watched Fashion Police or TMZ.  My wife and I watch Jimmy Fallon.

-Name one thing in your life that you would like to do that you haven’t done.Skydive.  There was a time I would have done it in a heartbeat. Now, I'm too old and too chicken.

-How do you determine the cities, states etc. where your book takes place at?Good question. By process of elimination. Each story is different - so it depends on the characters. I might start by eliminating NY, LA, Chicago, etc.  All the really big cities.  My next book will be set in Miami.  Earlier, I had considered Nashville, but then I changed my mind.  Sometimes I will consider 20 or 30 cities before making my decision, and often Google is involved.

-What is your favorite genre to read?BDSM Erotica.

-What is your favorite movie of all time?Empire of the Sun.

-What is your favorite genre of music to listen to?If I had to pick only one - heavy rock such as TOOL.

-If you had to play a theme song each morning what would it be? Humans Being by Van Halen.
Posted by Unknown at 9:27 PM

Email ThisBlogThis!Share to TwitterShare to FacebookShare to Pinterest
Labels: Al Daltrey, Who Wrote That Book Wednesday