Review: With A Twist by Staci Hart 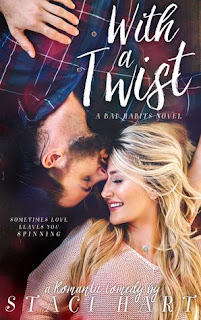 Love is somewhere near the bottom of Lily Thomas’ list of life goals, right next to competitive eating and underwater cave diving. She’s spent six years pirouetting and pliéing her way up the ranks of the New York Ballet with her eye on the prize and love in the back seat. But now that Blane Baker -- Lily’s long time crush -- is finally single, she’ll throw her rules out the window without thinking twice.

Reality with Blane isn’t as epic as the fantasy she imagined, and the truth sends her spinning straight into the arms of the man she never knew she’d always wanted.

West Williams has been friends with Lily since the day she moved into their building and he saved her armoire from a swift, sudden death by staircase. Their friendship has always been easy, the boundaries clearly defined. With neither of them willing to risk their relationship, they’ve drifted happily through the years as companions, never considering more.

That is, until they do. And that realization changes everything.

Purchase With A Twist on Amazon

Wow, this was such a sweet read about two friends who slowly start to acknowledge they might have feelings for one another. It has some drama mixed in with it and of course things will not go as easy as planned but the drama just adds more interest to the story. West & Lilly have been best friends for a long time and have never crossed any lines. Lilly has had a crush on her dancing partner Blane forever it seems like and when she finally gets the chance at being with him it ends up not being all it’s cracked up to be and you betcha West will definitely be there to pick up the pieces. Will it be as the best friend or more though?

I loved West & Lilly and their group of friends. They were all so much fun to be with. The sarcastic banter between the guys was funny and the girly gossip between the women was hilarious! The story is good, well written and flows easily.

(Sighing) see what I mean, just sweet, sweet, sweet! I had butterflies at times and found myself saying awe that is so sweet. I was really pulling for West & Lilly. This was a perfect little friends to lovers story.

Staci was a new Author to me and I will most definitely be checking out her other books.