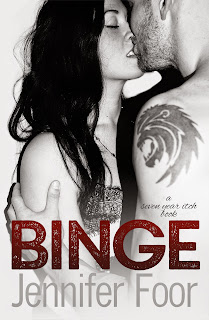 Flynn & Aria Roberts have had plenty of ups and downs during their seven year marriage. Everyone warned them not to wed so young - that they'd be missing out on the key years when people grow from young adults to mature individuals.

The only thing holding them
together now is their
love for each other,
and even that is becoming questionable.
To save the marriage, and the family they've already started, Flynn and Aria come up with an unconventional solution to help them find what's missing in their relationship.

The only problem is doing so involves rediscovering themselves completely, even if it requires them to be unfaithful.
Can a marriage survive
when vows are broken, or will chance encounters prove they've been missing out all-along?

Fulfill your
deepest Desires
Give in to
temptation

ARC provided through blog tour for an honest review

In the beginning this book made me feel a variety of emotions. Aria & Flynn both made my heart ache right from the start. The beginning of this book pulled me in quickly. I liked that it was going to deal with a married couple and their problems. I also liked that the problems were real problems that I believe some couples struggle with all the time.

Aria &Flynn were married and became parents at a young age. Like most young couples they had problems and some things happened along the way that cannot be forgotten or forgiven and they drifted apart from one another. When that happens it can destroy a relationship and we get to see that first hand. The Author holds back no punches between the couple as they fight to save their marriage it gets real ugly at times which honestly can be real life.

What I loved most about this story was that no matter what happened between this couple I never felt like they didn’t love each other. I truly felt like so many feelings and things were out of their control at times and they were lost but I totally believed in their love for one another all the way through the book and I couldn’t wait to see what the outcome would be.

This first part of this book was an emotional book but a good book about being married young and allowing one another to grow and trying to grow together instead of apart. The story was heartfelt, the characters were real and well developed and it was different from any other type of story that I have read... with that said I had expectations for the story to go a different direction than it did and there were just some things I hoped to have happen that didn't and therefor I am giving it a 3.5 star rating rather than a higher one.

Jennifer Foor is an award winning Contemporary Romance Author. She's best known for the Mitchell Family Series, which includes ten books.
She is married with two children and spends most of her time behind a keyboard, writing stories that come from her heart.